The Pokémon Company shared more information with us on their highly anticipated new mainline games Pokémon Scarlet & Violet. On Wednesday August 3rd the world was treated to a Pokémon news update, which included new features in Pokémon Go! – Ultra Beasts and so on, new events and campaigns in Pokémon Unite and the return of the IRL Pokémon league, which this year will be held in the UK! (Thank god I’ve already got my 10 badges). But what most of us at Gamerhub were interested in, was the Pokémon Scarlet & Violet updates.

Ride your legendary Pokémon into battle

In all seriousness, it does look like a pretty cool way of getting round, but ever since imagining Obi Wan Kenobi vs General Grievous on a TSMEU-6 bike as Pokémon trainers riding around on their Pokétransformers, the concept will always make me shuckle. What this segment did show us though was the size and variety of the Paldea region, lots of biomes featuring a load of different Pokémon, and a reminder that these Pokémon games are fully open world.

There does also appear to be much more variety in character customisation too, as well as NPC variety. Speaking of variety, this also applies to the Pokémon themselves. In the new trailer (see below) there are plenty of Pokémon both old and new, including a new Wooper which could also have a new type of water/poison or poison/ground – Although water/ground is definitely superior! And Speaking of new types…

For the first time ever (since crystal Onix in Pokémon the anime back in the 90s) Pokémon have crystal or ‘Tera’ forms. This works much like mega evolutions, but any Pokémon can have them and they get a stat boost as well as a new typing combo. What is cool about this is that the types that can be found are not locked so you can really throw your opponent a curveball in battle.

Some type combos are rarer than others but Terastal Pokémon are more common to find in raid battles. This encourages players to play with friends more and work together to add to your Teastal Pokémon collection. So, these battles also work differently the normal turn-based battles we are used to and borrow more from the Pokémon Go! or Unite games… Makes you think could they be thinking about moving away from the turn-based combat we are used to… 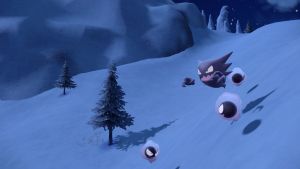 For any of you who have read my Pokémon pieces before (read here) you will know I have been crying out for variation in Pokémon games for a long time from an RPG point of view. Pokémon, as an RPG, has been poorly developed over the years. With our only option being the Pokémon gym and league challenge and the double trouble of 2 side quests… That of completing the Pokédex and defeating Team Rocket.

Now we have been told that there are 2 other main questlines for us to take on, as well as the Pokémon league challenge. We also have The Treasure Hunt, which I imagine has something to do with finding rare terastals. This is done with the Pokémon ‘Acacademy’, which go by version dependent names.

By having these two other main questlines to do (which remain relatively secret) we are able to go and complete the gym challenge in any order we want, which is pretty cool. It does beg the question about level scaling though… Will it be done like other games where battles scale to meet player level?

There are many other bits of information given away such as the names of your professors, academy faculty, peers and Gym Leaders. Check out the full video below Please be advised the Pokemon Scarlet and Violet segment starts after 9:09: