Who are Team Dissonant

Team Dissonant of Infinite Whys are a ‘rowdy bunch of cowboys’ who like many, decided to team up during the midst of the Covid-19 pandemic, working together remotely to create this very cool sounding coop murder mystery game which they have been working since July 2021. The team is mostly made up of recent graduates from across the UK, banding together through the Kickstart scheme under an experienced director, they then began crafting their dream game project. Read their story here (link: https://bit.ly/3zzeFuc ).

The talented developers at the London based studio, have recently launched a demo for for their online co-op murder mystery game, Whispers in the West. This comes at a great time just prior to the launch of their Kickstarter campaign! This gives potential backers the opportunity to get to experience the essence of the game before deciding if they want to back or not. 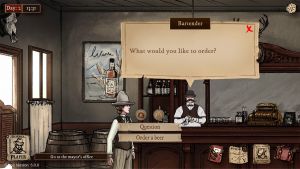 Whispers in the West

Whispers in the West is a point and click online coop, murder mystery that allows players to play in groups of up to four players. Whispers in the West is set in the far reaches of the Wild West, it allows players to fast travel around the map to a variety of locations to discover all the clues in a ‘whodunnit’ style plot. There are many secrets to discover which will make the mystery a real challenge to piece together. Meet the towns folk and decide who you think the bad guy is.

Some key gameplay features of Whispers in the West:

On the back of the successful demo release at June 2022’s Steam Next Fest, the Kickstarter campaign aims to raise funds for three new mystery scripts. Each of the new stories will provide players with an hour-long mystery that players can solve in groups of up to four. Supporters of the Kickstarter campaign will also receive exclusive perks in the form of hand-picked merchandise to reward their early support.

Team Dissonant have made incredible progress, considering The Whispers in the West project was only conceptualised in July 2021. This means that in less than a year they have released the demo of this multiplayer, murder mystery game on Steam. The demo has received excellent player feedback too! Over 80% of players giving feedback from the 1500 strong downloads said they enjoyed and would recommend the game, and dozens of creators have streamed the game on Twitch.

At London Games Festival in 2022 The Whispers in the West has won praise as one of the Official Selection titles, and it’s going to be part of the upcoming Tiny Teams Steam festival, which celebrates “micro studios and massive ideas”.

Check out the demo launch video below, followed by a link to their Steam and Kickstarter pages.

You can support their game on Kickstarter here: https://www.kickstarter.com/projects/whispersinthewest/whispers-in-the-west

Or you can try the demo before backing it: https://store.steampowered.com/app/1868070/Whispers_in_the_West__Multiplayer_Murder_Mystery/

Gamerhub will be keeping an eye on this one leading up to full release.