Ashen Knights: Foreshadow is a top-down mixture of souls-like and hack’n’slash developed by Baykal Arts, a new and small game development team. Ashen Knights: Foreshadow is a debut project, both for the team as a whole and for most of its developers. As such, Ashen Knights looks very promising from such an apparently inexperienced team considering they have zero experience in creating full-scaled games! It is because of this that we want to shine the spotlight on them a bit. Nothing pleases Gamerhub more than seeing talented developers break into the gaming industry!

Ashen Knights: Foreshadow gets a prologue too!

Players will not have to wait too long to get a feel for the gameplay either as Baykal Arts are releasing a prologue for the game named Ashen Knights: One Passage. This will give players the opportunity to explore the different playstyles and get a feel for the two main characters Primos and Evelin. It will also really setup the story and help build atmosphere in the ‘Abyss-devoured’ world. The best of the details though, will come in Ashen: Foreshadow. Take a look at the gameplay reveal trailer below:

An few words from Baykal Arts

“Ashen Knights is an authentic combination of two complementary gameplays: souls-like and hack’n’slash. Our goal is to make sure that whoever plays this game never gets tired of the same repetitive gameplay. The moment boredom starts looming over the horizon is the very moment we change the genre. Meditative sword-dancing switches places with brutal slashing – and vice versa, turning Ashen Knights into an endless stream of fun and pleasure.”

“Here, you will find neither clunky tutorials, nor endless generic locations and mechanics. We at Baykal Arts are bored with games that have one and the same level lasting for several uneventful hours. So, we decided to make something different, something super dynamic and everchanging. About two minutes into our game, you will already find yourselves fighting in a massive fight. And every level here is a brand-new adventure that feels very different from all of the previous ones, visually and in terms of gameplay.” 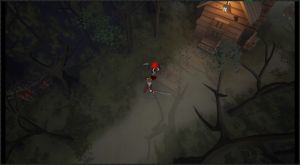 It has been announced by Baykal Arts that both PC and console players will get a chance to lay their hands on it very soon! To be kept up-to-date players are being encouraged to wishlist the game on Steam and wait until the release. The moment it happens – dive straight into the whirlwind of struggles and dominance, sheer complexity and pure battle fun.

Ashen Knights: Foreshadow will be released on PC via Steam. Wishlist the game now to play it the moment it is available! In addition to PC, Baykal Arts will also be bringing their game to PlayStation, Xbox, and Switch consoles. An exciting looking indie game to say the least, one you will continue to find coverage from on Gamerhub as we eagerly anticipate it’s release!