Stormrite is an upcoming open-world action RPG, and is set in the dark, fantasy-medieval kingdom of Redreach. In Stormrite players will play the role of a young squire, exploring a world full of chaos and conflict. Redreach is a tumultuous world filled with mystery, and dark secrets laying within. 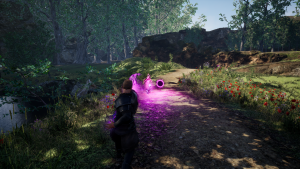 Across Redreach, there are a great number of mysteries. Players will discover mysterious ancient drawings that hint at the existence of some greater being. A being with god-like powers that can control time, the earth, the underworld, and anything else the human mind could perceive. Legend tells stories of it creating tornadoes, raising demons from the earth, and stopping time altogether. It is because of this might, that this being was feared across the land, and worshipped by those who were too afraid to oppose it. They called it ‘Rek-Tu-Hiem’, ‘Requiem’ in modern terms.

As players learn the power of the ancient runes, choose to become a fearsome warrior, or take part in large scale events that will shape the future of Redreach. With multiple endings to all questlines and a rich character progression system to decide how you interact with the environment and its inhabitants, you have the power to decide your role in the world of Stormrite. Check out the trailer for Stormrite below:

The awesome looking reveal trailer gives us a glimpse at the beautiful open world, the technical in-game combat and the awesome powers we can acquire! More gameplay snippets can be seen by following the Stormrite Twitter.

As players traverse the wonderous lands of Redreach, most of your time will be best invested in going on enthralling quests, exploring the and using various weapons and fighting techniques to dispose of your enemies. Stormrite boasts 3 main fighting styles, melee, ranged and magic. These are all interchangable and mergeable too! For example, ranged players can choose to go for a traditional bow and arrow loadout, can choose to go for a more clunky but powerful crossbow style, or even a hybrid melee-ranged loadout utilising agility, daggers, and throwing knifes. Magic users can choose to cast spells that directly affect their enemies, summon companions to fight, or manipulate the very fabric of the world around them. You are also able to shoot spells into each other, resulting in some very interesting interactions that can be used to increase your options in combat. Melee users also have plenty of choices, with 5 fighting styles (and counting) to choose from, and abilities to aid with your battles. Super exciting! There is a huge amount of world lore already, more of which can be read up on at Stormrite.com.

Xbox does seem to be THE platform for RPGs at the moment! And from the trailer and the information available to us, Stormrite seems like it mat be the ‘go-to’ fantasy action rpg. Stormrite looks like an ambitious proposition from such a small team of 4, (but not dangerously ambitious) that draws inspiration from the best RPGs out there such as Elden Ring, Elder Scrolls and The Witcher. So far Stormrite has been announced for Xbox and PC and was already looking like an exciting proposition for many RPG fans out there…

When on August 2nd 2022, Lead Developer, Kelechi Apakama posted something bound to excite fans on Twitter…

From this tweet, which seems to be gaining positive feedback, it certainly hints that the developers are looking to put Stormrite on Xbox Game Pass, potentially for launch. Gamerhub will certainly be keeping an eye on this one to see how it develops and we look forward to the release of Stormrite.