Remote Life Review: It’s Time For the One Man Army

These days, “shmups” – or “shoot em ups” as some people refer to them – are becoming more commonplace. Between classic shooters getting a revival and now games entering the fray, there’s no shortage of “one person against the world” scenarios. But it’s interesting to see a game prepared by a one-person team – in this case, Remote Life from Next Game Level.

Now, it’s a bit on the grim side, so that won’t be for everyone. And, as expected with any good “shmup,” it’s hard as heck. But those that stick with it will find plenty of reward from its twin-stick set-up, as well as its impeccably impressive design. Again, keep in mind this is mostly the work of one man. If that doesn’t shock the hell out of you, we’re not sure what will.

Setting Out Against the Aliens

The game puts you in the ship of pilot John Leone as he sets out to lay waste to an alien horde. But he’s got an interestingly armed ship, one with three kinds of weapons – missiles, lasers, and a gatling gun. He can also control outer cannons on occasion, shooting at enemies with additional firepower (but not as often as you’d think).

As he journeys, he can pick up new power-up icons to juice up these weapons efficiently. The missiles can take on homing abilities, the gatling gun gains serious power, and so forth. Some are better than others (I’m not a laser person myself) but seeing what kind of power-up route you can take is cool. As expected, you also have bombs you can drop, but in limited supply. 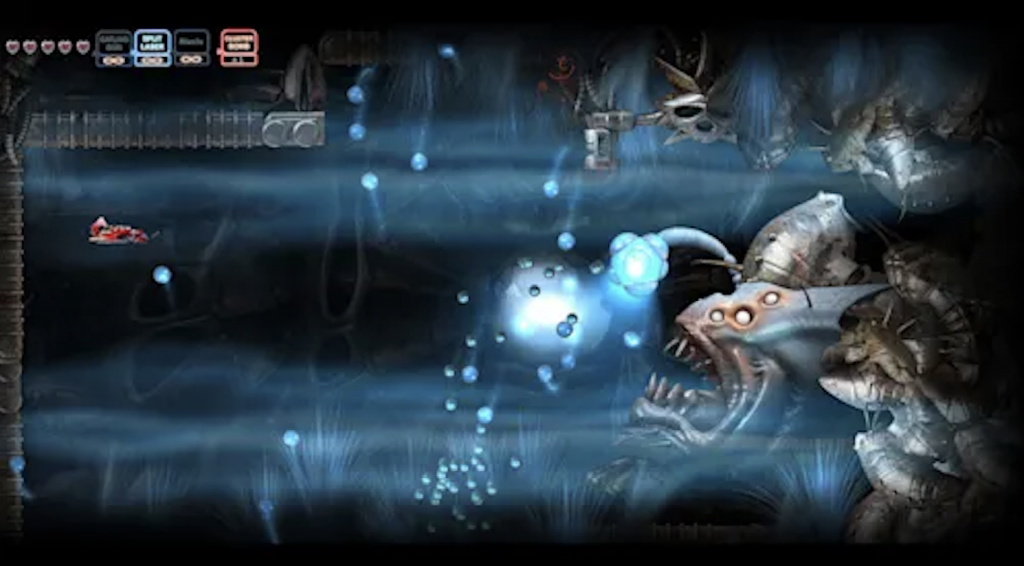 That said, you’re going to need this firepower. The game is tough. But it’s tough in a good way, keeping you on your toes like a good “bullet hell” shooter would. The bosses are also creative, forcing you to stay a step ahead while you figure out their pattern. This is a really nicely designed game, even if it’s somewhat sliding on basics every once in a while. (Remember, one man project.)

A Harrowing Design (That’s a Compliment)

Remote Life benefits from harrowing design. Like, we’re talking R-Type level sort of creepy, with alien limbs that pop out everywhere and unspeakably ugly aliens. That’s cool, though, and it pays loving tribute to these types of games while carving a niche out for itself.

The levels are also tight, meaning you’ll have to watch yourself while you go around corners, lest you crash and lose one of your precious ships. That said, practice makes perfect; so even if you die quickly enough, you can, ahem, live again and learn from your mistakes. The best kind of shooters challenge in this regard.

As for the music, it’s very well done, and fits the spooky space motif that Remote Life has with its visuals. That said, the synth voice provided by a secondary character gets really annoying at times, and I wish there was a way to shut it off. Sigh.

While Remote Life won’t be for everyone with its dark theme and high difficulty setting, it’s a must for anyone in the market for a cool “shmup.” It’s got its heart in the right place, and its gameplay is addictive, especially as you power up. The graphics look great as well, especially on a 4K TV. You may have a full plate of “shmups” you want to own already, but, for the low price, Remote Life is well worth the addition.